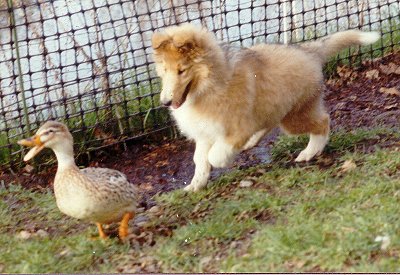 At 10 weeks old, Lizzy has her first contact with ducks. 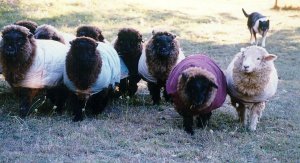 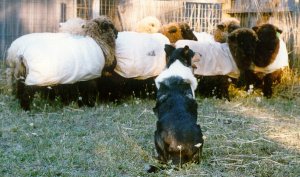 She puts them into a corner of their pen, then calmly holds them there for hoof trimming and vaccinations.

Last weekend, I was visiting a kennel, evaluating several adolescent and adult collies to determine which ones I considered to be the most promising prospects for herding. Early the first morning I was there, I went out to the 5 acre pasture with Stanley to gather up the small flock of sheep we were going to use for testing, to bring them to the arena. We made our way through several gates between the pasture and the arena until we had the sheep in a small holding area with a gate on either end. Being unfamiliar with the property, and only half awake, I opened the wrong gate. Instead of releasing the sheep into a final small paddock before the arena, I realized too late that I had just turned the sheep loose into a large open area that included the house, the kennel, the car port, several ditches, and lots of tall weeds and dense trees to lose sheep in.

Stanley efficiently cornered the sheep up near the house. Now all we had to do
was get the sheep past the kennel full of wide awake barking collies, around the cars, and past the house without sheep panicking and running up on the deck of the house, running through the sliding glass doors, running into or over automobiles, without getting hung up in the car port with the stacks of crates and bicycles lying around…. The possibilities for disaster seemed pretty endless.

This weren’t no arena course! In uncharacteristically calm fashion Stanley threaded the sheep along the fence behind the cars and past the crates and bicycles. But now we were stuck. The sheep kept playing ring around the rosey around the two parked cars and there was nothing the two of us could do to cut them off. Each time they made a circuit around the cars I had visions of sheep legs getting caught in bicycle wheels, or panicked sheep eventually ramming a car or even attempting to jump over it. And there was always the sickening possibility that even if we did manage to extricate the sheep from their maze of vehicles, they would next bolt straight to the house, through the glass doors or off the 15 foot high deck. This was not a fun moment. Then to really add to the mess, my hosts’ 12 year old matron bitch wandered onto the scene to add to the confusion. Just what Stanley and I needed was an untrained dog wandering randomly about in this impending mayhem. And then a miracle happened.

The old bitch (the dog, not me) edged her way along one side of the fence. She and Stanley looked at each other, and I swear to dog, the two of them communicated a plan to each other. The old bitch covered one corner, faster younger Stanley did the heavy lifting of pushing the sheep between the cars one more time, except that this time old lady was there to cut off their usual dart back around behind the cars. Old lady continued to patrol a perimeter between the sheep and the house as Stanley pushed them down the lane back toward the pen from which I had stupidly released them. Then she swung out to position herself where she could prevent a second escape into the woods. Stanley quietly kept the pressure on, and cut off an attempted detour into a ditch. The sheep gave up and went into the pen single file like a scene out of Babe.

I never said a word to either dog. My entire contribution to repenning was to latch the gate as the last wooley edged through. My hosts slept through the entire incident. I have spent a fair amount of time training Stanley, but he has never worked as a brace with another dog and he has had zero experience solving the kinds of problems we were faced with. And training certainly had nothing to do with the old lady clearly recognizing the problem, devising a plan to handle it, and communicating that plan to another dog that she had never even met. She was amazing. That didn’t come from bottle rockets or clickers. That came from genes, and not every collie is born with anything like an equal dose of those genes. In my humble opinion.”