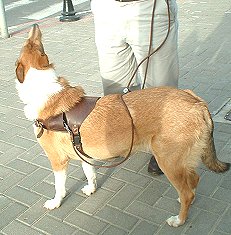 For the wide majority of the elderly coping with Alzheimer’s, their home remains a familiar anchor and their daily routines provide secure comfort. But the distraction of new stimuli or even too much of the familiar at one time can produce anxiety that only exacerbates the symptoms. Couple this with the fact that Alzheimer’s patients don’t necessarily feel physically ill, so ensuring some degree of independence and the ability to leave home, if only for a walk, is vital to balancing the mental and emotional fallout of this disease.

Taking all these factors into consideration, a resoureful dog trainer based in Israel came up with the concept of an Alzheimer’s aid dog. Having trained assistance and service dogs for people with a variety of physical challenges, Yariv Ben-Yossef challenged himself to use the canine-human bond in improving the welfare of people in the early to middle stages of Alzheimer’s disease. To put his theories into practice, Ben-Yossef gathered experts from the worlds of human medicine, scientific technology and dog breeding. 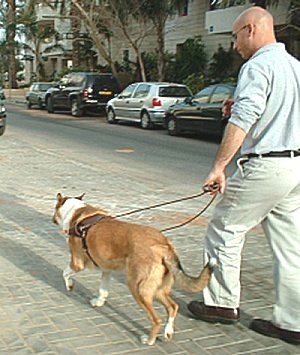 Contrary to the custom of using Labrador or Golden retrievers as service dogs, Ben-Yossef had a different breed in mind. “The basic qualities that I looked for in a female dog of a certain size were well-developed drives, maternal instinct, ability to function under pressure, and stability regardless of changes in routine or variability of lifestyle,” he says. What he wanted was the smooth Collie – the short-haired version of Lassie.

With help from an Israeli Collie breeder, Ben-Yossef contacted Eva and Leslie Rappaport, an Oregon-based mother-daughter team, who have bred and trained their Kings Valley Collies for 34 years. Their dogs have earned championships and titles in conformation, obedience, agility, herding, tracking, and rally, and have been used for protection, wilderness rescue, therapy, guide dogs for the blind, and assistance dogs for other handicaps. Now Alzheimer’s aid dog has been added to this impressive list of accomplishments.

The Rappaports’ philosophy about breeding meshed perfectly with Ben-Yossef’s. The Rappaports have strived to create Collies who, as Leslie notes, are “sound in mind and body, resilient in personality, physical sturdiness, and good health.” While this statement may apply to all breeds of dogs, both Ben-Yossef and the Rappaports agree that the Collie brings a special instinct to service work, traceable to the breed’s ancient relationship to the shepherd and his family as well as its channeled drive to care for vulnerable creatures.

Leslie and Eva have taken that instinct a step further, breeding for and training Collies to trust their own common sense, wisdom, and decision-making ability. The Rappaports look for dogs not just capable of performing a particular kind of task, but ones who can adapt to new situations and, as Leslie describes it, “can apply what they learn in one setting to new and changing environments.”

When selecting a puppy for Ben-Yossef to train as the first American-bred Alzheimer’s aid dog, the Rappaports found an ideal candidate named Kings Valley Wonder of Wonders. When Ben-Yossef began working with her, he gave her the call name Sunshine and she’s living up to everyone’s expectations.

At the completion of Sunshine’s training, Ben-Yossef and the Rappaports hope to place her with an Alzheimer’s patient here in the United States to demonstrate the profound and positive value an Alzheimer’s aid dog can have. Ben-Yossef and the Rappaports also hope to establish a center for training and placement of Alzheimer’s aid dogs in the U.S., so that the impressive work begun in one small corner of the world can benefit many more.

Sunshine will learn to respond to an electronic homing device, equipped with a type of global positioning system, which indicates the need to bring her patient home as well as their location. Similarly, her bark will signal a communication device, alerting the family that the patient is in need of special assistance. Most importantly, Sunshine’s Alzheimer’s patient will never feel lonely or alone again, not as long as this smooth-coated Lassie is present, bringing a sense of life, joy, and purpose with each light step, meaningful bark, playful glance, and gentle kiss.