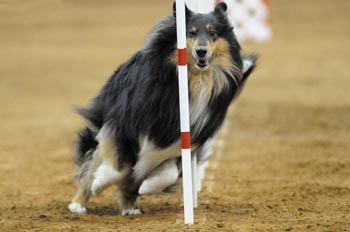 According to the AKC, “Agility Events [are] the epitome of team work,” blending training and athletic ability. “As they scamper over footbridges and A-frames, through hoops [and tunnels] and over jumps, the dogs are constantly alert to the verbal cues and body language of their owners and handlers.” It’s a high-speed feat that gains momentum from the cheering crowd. Photo: JoJo, shown here competing in the poles portion of the National Agility Championship, won her Master Agility Champion (MACH) title. She is also known as MACH Ryder’s First Edition, XF and she is a full sister of Ch. Kings Valley She’s A Ryder, HC,TC. 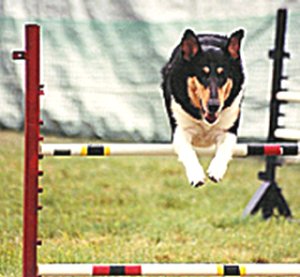 Melanie Collins writes: “Echo and I competed in USDAA over the weekend…. When it came time for our run, there was an incredible downpour. The three dogs before us said no way, we aren’t running in this. It was our turn, so I got behind Echo, let her know we were going, and we went. It was unbelievable. That dog worked for me in the pouring rain. She did great. 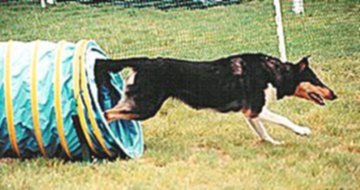 “She came out of the tunnel and we were moving too fast.. It doesn’t matter… she proved to me she will do what I ask of her. She had a clean run in jumpers…in the rain with a fourth place. On Sunday Echo was the only one to qualify in her [standard] class, and therefore took first place.”