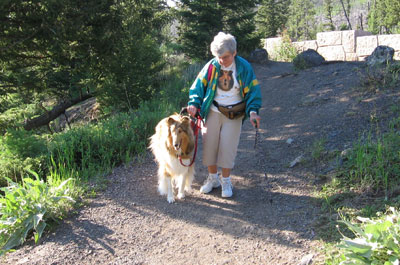 Stasha, my new assistance dog, and I had been together for seven months when my husband, Mike, and I were invited to visit our son, Ryan and his girlfriend, Mel, who were living in Belgrade, Montana. Since the town of Belgrade was located approximately one and a half hours from Yellowstone National Park, it was a great chance to see the park. Traveling from Dayton, Oregon, where we lived, Mike and I decided to travel by airplane. It would be a great opportunity to expose Stasha to the world of air travel. I hoped that Stasha would be up to the challenge.

Stasha was very young – barely 2 and ½ years old. Leslie Rappaport, of Kings Valley Collies, Stasha’s trainer, had asked me to be patience with my beautiful sable and white collie until she had developed the maturity of an experienced assistance dog. Because I had known for Leslie for 11 years, I was certain that she knew what she was doing when she had envisioned us as a team. Mike and I knew that we had to be prepared to deal with Stasha’s reaction to many new things.

Traveling with an assistance dog meant a trip to the veterinarian for a travel permit for my canine partner. At home, Stasha, along with a cane, supplied me with the balance that I often lacked due to my relapsing-remitting multiple sclerosis. Because my M.S. also affects my stamina, I took a manual wheelchair to use when I needed to walk further than six or seven blocks. 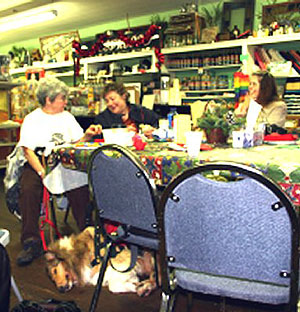 Under the American with Disabilities Act, assistance dog teams were able to fly together in the cabin of an airplane. However, earlier that year I had read in The Partners Forum, a newsletter produced by the International Association of Assistance Dog Partners that some airlines were attempting to impose new air travel rules for assistance dogs. Although I was wary of possible controversy, Big Sky Airlines made me feel very comfortable as we boarded the airplane. Later, I learned that the new rules applied to longer flights; however, I felt a little uncomfortable when an elderly gentleman grumbled because he had had to change his seat arrangements because of “ that dog”.

Through out the last ten years, my canine partners and I, along with our human companions, had traveled through the Panama Canal, floated on a barge down the Mississippi River to enjoy the Mardi Grae, and journeyed to the Mayan Peninsula to explore the ancient ruins. Blessing, my first canine partner, was a great traveler; however, Sega, my second partner had a difficult time adjusting to air flight, so I was not sure what to expect from Stasha. Fortunately, through all the commotion that occurs in an airport, along with all the attention that she received, Stasha seemed to take everything in stride. In fact, she, unlike me, didn’t react when our small airplane was forced to endure a thunder and lightning storm.

Mel was waiting for us when we arrived at the Belgrade Airport where we rented a Dodge Durango for the weekend. That evening, we hosted a dinner for Ryan, Mel, and their roommate at a local restaurant. Although Stasha and I had some problem because of an open grate in the floor, I was able to guide her around it. to avoid possible injury. After dinner, we spent the night in a “dog-friendly” motel and ate breakfast at a neighboring restaurant.

The next morning the five of us, along with Stasha, and Ryan’s dog, Sydney, headed for Yellowstone. We entered the park through the Roosevelt Arch – a memorial to President Theodore Roosevelt who helped establish the nation’s first national park.

Although there were a number of ways to enjoy everything that Yellowstone had to offer, we opted to drive the Grand Loop Road. Since I often need “potty stops”, I was pleased to note that there were restrooms located within easy access everywhere. Since Mel had worked for a season at the park, she had suggested that we needed to make an early start in hopes that we might be able to see some of the 60 animal species that called the park home. Since the wild animals were free to roam at will, unless they proved to be a threat, the chance of seeing one was often based on luck; however, our chances increased immensely due to our early arrival.

When we pulled into the ticket booth, where we paid our entry fees, we were given a handout – Your Pet and Yellowstone. The following said it all —Yellowstone National Park is a designated natural area where wildlife is free to roam undisturbed. Park visitors should be able to enjoy native wildlife in their natural environment without the disturbance of other people’s pet. For this reason, pets are prohibited in the backcountry and on trails and boardwalks.

Since Stasha was an assistance dog with all the privileges that her life’s work afforded her, much did not apply; however, it was always my responsibility to follow the rules as much as possible.

Before the day was over, we saw our share of animals. It was easy to tell when an animal was within view because there were at least two to three vehicles stopped with their occupants snapping pictures. We saw a number of buffalo, deer, and elk, but when we had the opportunity to snap pictures of a grizzly bear and a mother black bear with her two cubs, we knew our trip had been worth it.

The park had many geological features to offer as well. There were hot springs, geysers, boiling pots of molten rock, and bubbling pools of steaming water to mention a few. Since the park was located in an extinct volcano, the smell of sulfur fills the air. That there were wooden ramps for easy view for everyone added to the enjoyment. The Yellowstone River wound along the road, creating a number of fantastic views as we drove through the park.

After about eight hours of driving with a number of stops, I was pleasantly exhausted. It was obvious that Stasha was tired as well, when in front of Old Faithful Lodge, I learned what “refusal” in equestrian terms meant. Perhaps it was the unfamiliar smells or the rumblings of the earth below our feet, but when Stasha refused to move, it was obvious that my canine partner needed a well-earned break. I couldn’t blame her.

All in all, it was a great trip. Despite her slight problem in the park, Stasha did quite well. We got to spend time with our loved ones, and we got to enjoy all the great sites of Yellowstone. Being a national park with completely handicapped facilities, it made for a wonderful vacation spot.

Shiela Henry and her canine partner live in Dayton, Oregon, with their human partner, Mike and Sega, a retired assistance dog. Stasha’s job is to help Shiela with balance.