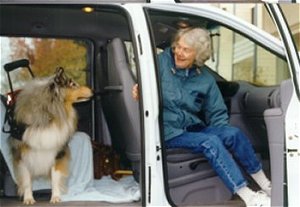 “…we got home without any problems..[Sera] thought she should sit in the passenger seat…but I prevailed. She seems to like the house a lot…was a little hesitant about the vinyl floor…but with some encouragement, … walked across it and now it doesn’t bother her at all. She jumped on the living room sofa first thing, then the futon in my study, and then the bed. No problems “hupping” on any of them!

“Sera …was very happy to see [my neighbor’s] 5-year-old daughter—gave her a very loving greeting. My cat, however, took one good look at Sera, hissed, and ran off. …Sera was very happy to get her dinner, polished it off in no time flat;…I sat and read for about an hour after dinner with her beside me, her head in my lap and moaning contentedly from time to time. Then I put her out in the yard for a half hour till I heard a gentle scratch at the door and let her in. Now we are about to go to bed, both very tired.”

“Things are getting more relaxed here. The cat is beginning to realize that Sera is not the monster to end all monsters, her size notwithstanding. He even joined us on the bed last night…!” 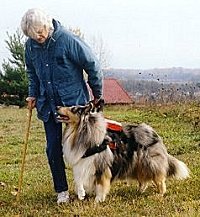 “…She communicates very well with me. One morning I didn’t make my bed as I usually do, and she walked over to it, pushed her nose against the covers, and gave me a meaningful look, as if to say ‘shouldn’t you make your bed now?’ What’s more, I did!”

“Sera likes meeting my friends and gets many, many compliments about her looks… And she has shown that collie psychic power. Sunday Sera and I went to the movies with a friend…On the way back…Sera edged me over against a building, placed herself in front of me, and wouldn’t budge. There were two policemen ahead of us standing by a building. I assumed she saw something threatening in their stance, so I took a circuitous route to the car. My friend…talked to the police after I left, and they told her someone had broken into the building and they were waiting to catch the intruder. So it seems Sera definitely sensed the danger.”

“This second month has been much more relaxed for Sera and for me. We know much better what to expect from one another and our life together has become more routine…..we have undertaken …an art group …and Sera likes that a lot. The others in the group all like her….[she] likes to be acknowledged by everyone…as she does with the people in my poetry group…If anyone forgets to say hello to her she look at them expectantly until they do!

“My cat Izzy is no longer acting afraid of Sera…he’s very interested in Sera and follows along when I take her for a walk. And she keeps an interested eye on him, too. I still have hopes they’ll become friends.

“I’m leaving for a week…staying at friends’ houses, both of them dog -friendly and in rural settings. I talked to the…Airlines staff…to make sure they’d give us an appropriate seat on the plane.

“I marvel at Sera’s sweet, compassionate nature. The world would be a much better place if more humans were like her. She brings much joy to me and it delights me to see people smile and have their faces light up when they see her….” 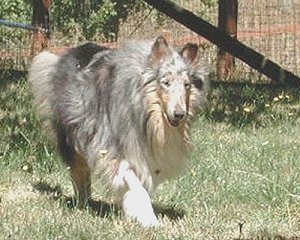 Sera enjoyed her month-long retirement basking in the sun and strolling with her mom.

She died peacefully under her favorite cherry tree and is at rest at Kings Valley, among her ancestors.

I give you this one thought to keep-
I am with you still, I do not sleep.
I am a thousand winds that blow,
I am the diamond glints on snow,
I am the sunlight on ripened grain,
I am the gentle autumn rain.

When you awaken in the morning’s hush,
I am the swift uplifting rush
of quiet birds in circled flight.
I am the soft stars that shine at night.
Do not think of me as gone-
I am with you still – in each new dawn.