Angel, the cat who has been hiding out since August finally came out and boy did she!! I gave Sammy dinner last night and when I turned around I noticed he didn’t eat. He had the most puzzled expression [on his face] I have seen [yet]. I couldn’t figure out what was wrong with his food until I looked. There was Angel eating out of his bowl!!! Poor Sammy didn’t know what to do! After I nearly fell over laughing, I scooted Angel away and he got to eat. Now I have all 3 in the livingroom.

I told you that Sammy would go outside and I would occasionally hide treats around the living room for him to find. Well about 2 nights ago, I heard him leave (you can hear the dog door close). I walked into the bedroom to get something and there was Sammy hiding beside the bed. He was poking his head outside letting the [dog door] flap fall down then sneaking into the bedroom until he heard the cabinet or refirgerator door close then he’d come out [to play our search game]! That is one smart dog!!!

We were walking on a leaf covered sidewalk and Sammy suddenly stopped walking. It took a moment [for me] to realize the sidewalk was uneven and covered in leaves. I would have tripped if he hadn’t been watching.

Here Karen wrote “watching” but technically what Sammy did was much, much more. He evaluated what he couldn’t see, determined by the feeling under his feet that the terrain was unsafe for Karen, and he stopped her, “marking” the danger, and in so doing, he prevented a fall!

What is so amazing and wonderful, is that he was thinking as he worked, and was so focused on his work that he evaluated by feel, what he couldn’t see, and then responded in just the RIGHT WAY to keep Karen safe! This was a terrain change he could have easily managed himself – but his training, attentiveness and love for Karen enabled him to “mark” this danger for her!

I am very proud of Sammy. I’m proud of Karen too; she responded appropriately by stopping when Sammy indicated she should and praising him for his effort – even though she didn’t know the danger was there – she trusted that Sammy knew best – and that trust kept her safe!

When I first started the search for a Service Dog, I felt frustration and anger that no one out there seemed to care about people with mobility problems. When I was told about Leslie, I felt hopeful skepticism. After looking for so many months, to find someone who did exactly what I needed, was for me a reason for cautious optimism. When I had a “Walkabout” with Laddie, I could not believe that it was really happening! I still felt the need for the cane because by that time, I had already fractured some ribs, sprained wrists and had numerous bumps and bruises due to balance issues. 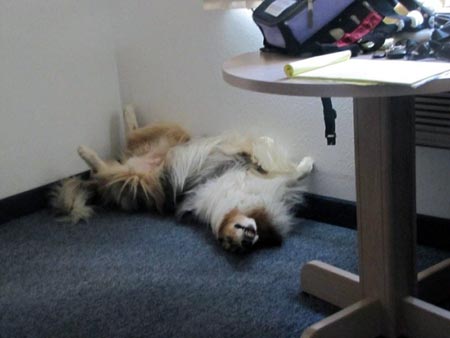 When the harness came off, Sammy enjoyed putting his feet up to rest!

When Leslie told me about Sammy, I thought that she would call or write and say that it was a mistake and it wasn’t going to happen. Even after meeting him and through the entire training process I kept waiting for it to fall apart. I wanted it to be real but could not believe that something like that could happen for me. The final week of Sammy’s harness training was an incredible experience; having spent time with him, I was starting to believe that he and I could bond and function as one. Once we started our Team Training, I found that my belief in Sammy and his belief in me was so tight that my cane became an annoyance! 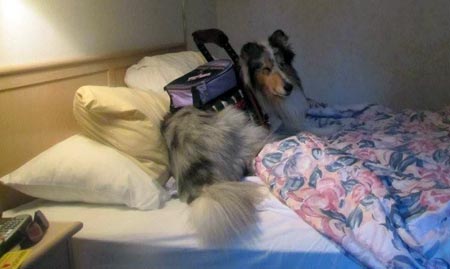 Getting to know each other in the motel room…. “Whose bed is it anyway?”

Since completing Team Training, Sammy and I have been to grocery stores, clothing shopping (although, being a man he offered no opinions about clothing choices), we’ve walked together along busy streets, in wooded areas and in forests. We have also gone to my volunteer job at the Hillsboro Wet Lands where we sit and chat with visitors coming in. We have been to a dog park where Jessie and Sammy started getting along really well; although Sammy just can’t figure out why any self respecting dog would chase a ball and bring it back – only to have to go get it again!!! He looks back and forth between Linda and Jessie, with the most puzzled expression on his face!! We have also spent quiet days; outside under our cherry tree in the backyard, or in the house cuddling, up on the love seat, or down on the floor. 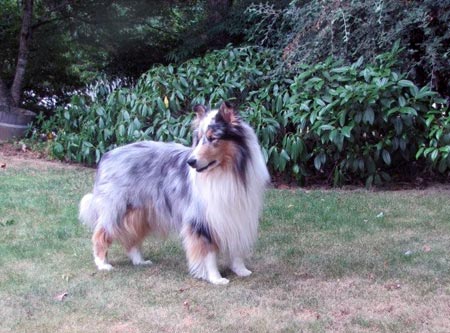 Off-leash and out of harness, it’s a visit to Joanie’s “safe yard” during Team Training. Time off to relax, sniff and play.

The first time Sammy and I walked alone, we were a little anxious, but as we went along we trusted each other to get the job done. I honestly don’t know how to put into words the feelings that I have for this wonderful, dedicated, brave dog. He gives his all every day and expects only to be loved (and to mangle a couple of treat-filled cardboard boxes each week – his favorite toys!). He is so special. People have told me that I walk straighter than they have seen in over a year. Life is good. 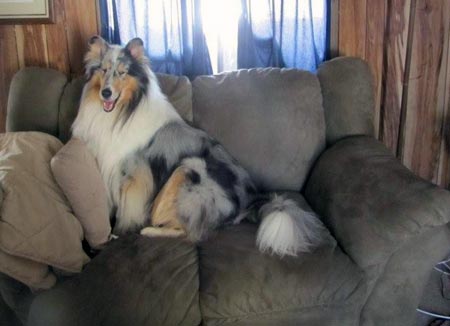 Sammy… happy in his new home. 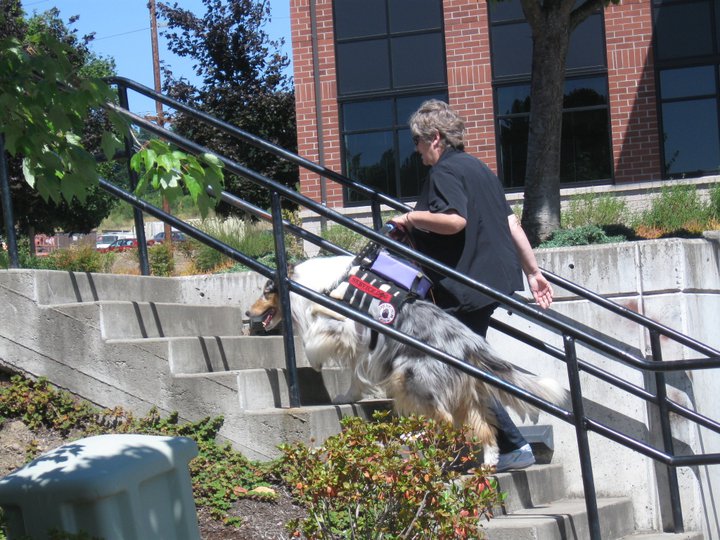 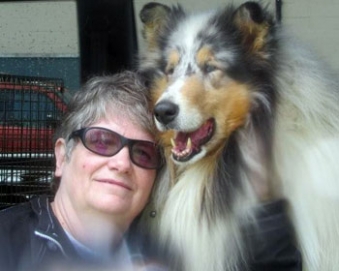