From day one, “Cole” was the standout in his litter: perfectly proportioned, broad and well-toned, with a beautifully detailed head and stunningly drawn markings. He always found his way to the best nipple. He relaxed in our cradling hands and dozed off under our warm breath.

At two weeks, he waddled to the front of the whelping box in response to our tapping. By three weeks, with eyes and ears fully open, he showed an unmistakable fondness for people. 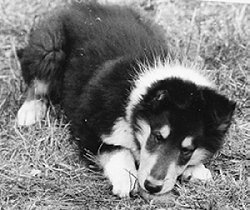 Because puppies’ brains become physiologically mature at seven weeks, we make every effort to provide a stimulating environment and to help the puppies explore and become comfortable in a variety of settings and associations with people and animals. They learn early that they have everything to gain and nothing to lose by interacting with us.

Cole’s athletic little body covered a lot of ground during those weeks of muscle building and discovery. Every object was a potential toy, every toy a treasure, and every treasure an offering bestowed upon us. Of course, such gifts brought lavish praise, and often hugs and kisses.

With his growing sense of security, Cole was beginning to develop a strong sense of self. He took great interest in the goings-on around him. Farm walks and car rides, dog shows and people gatherings, all contributed to an ever- broadening base of experience. 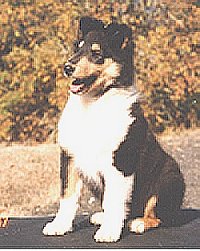 At eight months, Cole easily passed the Herding Instinct test, which rewards problem solving, and initiative. And he aced the AKC Canine Good Citizen Test just by living with us and hearing “let’s go,” “hop in the car,” “stay – I’ll be right back,” “wait,” “watch the door,” “go to bed,” etc.

Exposure to people in wheel chairs and on crutches prepared him for therapy work and his TDI title; and his growing awareness of what is considered acceptable human behavior helped him during the Temperament Test, which includes some startling and bizarre situations. Increasingly, Cole was applying his wealth of experience so that he could respond appropriately to new challenges. He focused on teacher and task and displayed a strong sense of responsibility toward his work. Without this quality, we may have a trained dog, but with it, we have a potential Service Dog. It is the difference between learning by rote and a broad-based, well-rounded education.

Each type of advanced work added to Cole’s effectiveness as a Service Dog. He loved the excitement of the show ring, but what he gained from it, besides his breed Championship, was a heightened ability to concentrate. Being consistently rewarded for giving strong eye contact stretched his attention span — an ability that served him well in all future tasks, particularly carting.

Carting skills sharpened Cole’s perception of distances. It also introduced him to an entirely new vocabulary: “stop,” “pull,” “back up,” “gee, or haw,” “wait there,” “easy,” “hurry,” “that’s good.” Cole always enjoyed teamwork, and he seemed to feel responsible for the safety of the cargo. He was happiest pulling a live load to the cheers of an appreciative public.

Carting and Backpacking sharpened Cole’s sense for the needs of others: those activities brought rewards for doing a service entirely for the benefit of another. We encouraged Cole’s proprietary feelings about his backpack by first filling it lightly with his own belongings before increasing the load’s weight. Each harnessing brought hugs and lavish praise for his patience and tolerance, and lots of compliments on his snazzy appearance. 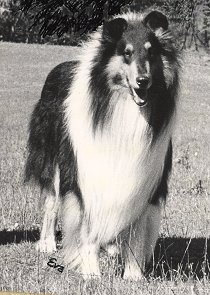 We are convinced that innate soundness is the product of selective breeding. We believe that soundness is critical to the usefulness, stamina, and energy output of a Service Dog. Cole’s body type was evident at birth; by eight weeks, his eyes had been examined by an ophthalmologist and found to be normal; by twelve weeks, we were certain of his strong, square rear; and by six months, his dentition was complete and correct. By twelve months, Cole had also met our criteria for intelligence by showing his ability to apply experience and acquired skills in new ways and to new situations.

“Cole,” Champion and Versatility Champion Kings Valley Select, was our prototype. He was a trailblazer and a model that set a high standard for all successful Service Dogs that have followed in his pawprints.