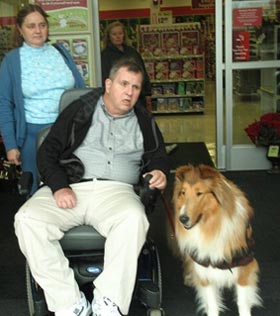 Things are going fine. Brynn is settling in quite well. He thinks all of the lawns of the complex is his and barks when he sees someone on his turf. He is beginning to understand that Scott goes away for a few hours 3 days a week. We bring Scott there and pick him up. Brynn spend the day with me we stop in different stores and gas stations and any other place that I think he may need to be familiar with. I brought him into Alex and Josh’s middle school office when I picked the kids up for an appointment. He did well until the changing of classes. he could not understand why all those kids were in the halls. I found out that he likes to meet people one on one rather than a group. I usually tell people that he is working and does not like attention when he is working. He spends most of his time with Scott but knows that he also get walks and treats and fed from me. He will play with the kids but only if Scott is asleep. He doesn’t like the sleep number bed so he gets his cuddles and then lays on the floor on my side of the bed. He is still telling on Josh if he leave his room after bedtime. I told Josh that God sent him a guardian angel so he wouldn’t get hurt at night. Josh tend to roam and get into things. So Brynn keeps him honest. We wouldn’t give him up for the world. Thank you so much.

Brynn is doing great. Did I tell you that the day before we moved to the house, Josh and I took Brynn over to explore the yard. We unpacked a few things and then went to look for Brynn to go home, he was gone. He opened the glass sliding door and opened the front door and started towards Scott. I immediately called 911 and the police found him half way back to the townhouse. He had decided that he had been away from Scott too long. He sits in the front seat and memorizes where we go. He knew the way back to Scott and was headed there. Brynn is a combination of both Lion and Ramsey. He has the best traits of both dogs. Brynn instantly recognizes people who should not be in our home, barks and growls until they leave. This is especially helpful with Josh. So far Brynn has only approved of one of his friends. All the other kids have gotten in trouble and Josh was with them. We put Josh in a special program so he won’t have a record but will learn how to socialize and how to challenge himself and get therapy in the process to heal his past.

You would be so proud of Brynn. He is performing as a pro when he is out in public. He sometimes needs encouragement when there are masses of Christmas shoppers. I’ve come to realize that there is somebody in the crowd that he does not trust. He immediately goes in front of Scott until that person passes. Then he either follows or stays on his left side. When I take him out alone, he is just as protective of me.
He is beginning to understand that he can play with the kids but he still keep a close eye on Scott. Scott is and always will be his first priority.

We had our first snow last week. It was only 2 inches Brynn loved playing in it. We also had a huge 2 day blizzard which left us with 18 inches of snow. When Brynn saw that he sat down and refused to go out to piddle. It took quite a bit on convincing to get him to actually go out. When he hit the snow he stopped, shook himself off and headed towards the sidewalk to piddle and ran back into the house. he still doesn’t like deep snow. I hope he gets used to it because it looks like it’s going to be a hard winter.