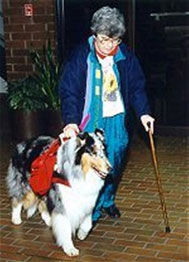 I would like to use this week’s Happy Tails to pay homage to a grand lady, Blessing. Blessing will turn 13 soon, a long life for any dog, but especially a large-boned dog like a collie. Blessing’s eyes have lost some of their brightness, and her legs some of their swiftness. But she still maintains an aura of elegance and grace. And her name so well describes what she has meant to her human companions over these many years.

I still smile when I remember my first encounter with Blessing. It was years ago, when Rebecca Tolby still had a practice in McMinnville. My modus operandi, then and now, is that I make an appointment in McMinnville and then leave Dayton exactly five minutes before I am due to be there. Now you can get to McMinnville from Dayton by the back roads or by the highway, but there is no way you can get to McMinnville from Dayton in five minutes, especially if your are a law-abiding citizen, as most days I strive to be.

So I arrived at Dr. Tolby’s office late, breathless and flustered, sank down into one of the chairs in the waiting room, looked around for a magazine and met the gaze of the most beautiful collie I had ever seen. This dog had a lush blue-gray coat, a magnificent build, and a demeanor so calm I felt myself relaxing even as I silently admired her.

She was at the side of a petite woman, the only other person in the doctor’s waiting room. I thought to myself, “What a beautiful dog. I’ve never known a collie to be a guide dog for the blind.” And then I noticed that the woman was reading a magazine.

At that point, the nurse came out and escorted this pair, woman and collie, into the doctor’s office. The woman rose slowly, cane in one hand. The collie rose as she did. The dog wore a harness with a thick handle strapped to its back. I watched, mesmerized, as the woman grasped the handle and leaned on the dog, while moving her other leg forward and then leaning on the cane. Six inches, eight inches at a time, this woman walked down the hallway, with this marvelous animal matching her steps. And this was how I began to know Blessing.

Blessing is owned by Shiela Henry. Shiela has had multiple sclerosis since the early 1970s. MS, as you may already know, manifests itself in several different ways. Shiela has the remitting/relapsing type. The symptoms of the illness will plateau for months, sometimes years, and then suddenly become acute and debilitating.

In 1993, Shiela had a very serious relapse. Although she managed to remain ambulatory, walking was exhausting. She had lost both strength and the ability to coordinate the movement of her legs. Like many illnesses, the symptoms of MS are exacerbated by stress. Shiela knew she would have to quit her job at Linfield College. These were very dark days.

Shiela remembered reading a very brief article about the innovative use of assistance dogs for people with MS in a magazine published for people with that illness. She called Delta Society, which now is a well-known organization that promotes the life-giving importance of the human -animal bond, but a decade ago was a very small operation in Redmond, Wash. Shiela was given the name of a kennel in Kings Valley that bred collies for show but had begun to train a few to be assistance dogs. Shiela and her husband called and then went to visit this kennel. And that was how Blessing came into her life.

As my personal interest in how dogs help us has grown over the years, so has the myriad of roles that assistance dogs can play. Of course, we all know about seeing-eye dogs. Yet there are hearing dogs for the hearing impaired, seizure dogs for those with epilepsy, trained both to alert their owners of oncoming seizures and break their falls when the seizures come. More and more children with Asperger’s syndrome rely on dogs to help them stay calm when the stimulation of a department store or school soccer game becomes overwhelming. And doctors are writing prescriptions for people suffering from depression or anxiety to get a dog to help them deal with these disorders with more hope and confidence.

Blessing’s role was to be the strength Sheila’s legs no longer had, but she served in many more ways that that. With Blessing’s company, Sheila had the energy to walk again and farther, regardless of how long it took to get there. The four or five blocks between Sheila’s home and Putt’s Market, where townsfolk gather for company and good-humored teasing, were no longer an insurmountable obstacle.

Shiela set a goal for herself to be able to walk again to downtown Dayton. With Blessing at her side, she was able to reach that goal, all the while regaining the strength in her legs that she had lost during her relapse.

And Blessing traveled the world, or at least this half of it, with her undauntable owner, even taking a cruise to the Carribbean. Shiela’s only tongue-in-cheek complaint about these adventures is the difficulty of navigating down a crowded sidewalk anywhere in the world with a drop-dead gorgeous collie like Blessing without everyone on the block asking if they could pet the dog, feed the dog, take a picture of the dog and so forth. But show-stopper that she is, Blessing always knew that her most important task was the woman leaning at her side.

When Blessing was close to 9 years old, her breeder called to let Shiela know about Sega, a 2 -year-old male sable collie that had completed training as an assistance dog. When I asked Shiela during our interview whether Blessing had been put out that Sega replaced her, Shiela laughed.

“Blessing’s still the matriarch,” she said. “Blessing sleeps in our room. Sega has to sleep on the living room couch.” Sega is also a beautiful, wonderful dog, who undoubtedly will continue in the span of his years to give Shiela love and service. But for now, I will honor the courage, warmth and confidence that Blessing gave to a bright, determined woman.

Most of us can probably recount some dark hour when a dog found our heart, let us know how deserving of love we are, brought us to a place of hope. The silly looking basset dozing at my side while I write this has known the moments of despair when I most needed her and has been at my side.

For me, this wonderful dog, Blessing, symbolizes how much goodness animals bring to us. May we continue to strive to deserve it. And may Blessing know, in the twilight of her years, that she has helped all of us understand how very, very important one life can be to another.

Nancy Carlson uses her two therapy dogs, Menehune and Fezziwig, in her grade-school counseling program. She has an enduring interest in the bond between humans and animals.

Back to Blessing’s Story | Back to Service Dog Stories