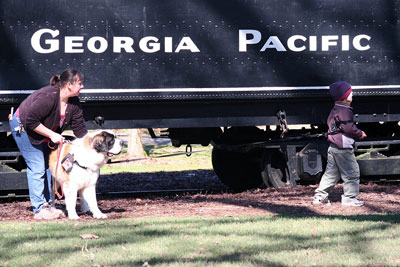 I hope fall finds you all well and not to upset by the turmoil in both our politics and our financial markets!

Since our last installment of Penny’s Adventures, much has happened here. Penny has been spayed and endured what seemed like and endless period of Vet prescribed confinement. Penny made her opinion of this quite clear, by attempting to throw her considerable weight around! Whenever she would see me coming by or watching her through the glass door, she would throw her weight up against the partition, holding on with her paws to the top rail. I realized that Saint Bernard kennels must be built of stronger stuff than Collie kennels! Once, just once I responded to her display of dismay and frustration with a pat and a kiss. Instantly I realized that this was a big mistake. Penny is very quick to learn! After some trial and error on my part, I learned that I had to let Penny see my disapproval of this behavior, before she would understand that it was unacceptable.

Requesting off was not enough. I had to RUN toward her waving like a banshee, before she aquiessed and remained OFF.

As soon as her prescribed confinement was over we rejoiced together 🙂 Immediately I scheduled her training and develop a detailed training plan for her. Based on my discussions with Tammy about her needs, I developed a tentative plan and began training. Penny and I are quite well bonded now and she is eager to please me. I began with a body harness the way I often do with Collie puppies. Penny thought this was great fun! But she didn’t understand the ideas I was trying to convey. I realized right away that this wasn’t the right approach for her, or for this type of work. I started again. After shopping for a giant training collar, I began again. I slipped the collar on Penny and praised her for her good looks. She beamed with joy 🙂 We went for a little walk…Penny leading the way. Again I realized I needed to re-evaluate. Penny didn’t understand that my presence mattered. She had no idea that I expected anything from her. I realized that I had to begin at the beginning. So that’s just what we did. I reminded Penny of the “Leave It” exercise she had learned on her first day with me. We reviewed those skills and polished them again. I also taught her “Watch Me”. It’s charming to see her lift her big head and stare at me with her soft eyes. As her patience increased, she held me with a steady, unwavering gaze. Now she is quite good at doggy zen. She can make and maintain eye contact with me even when I hold treats in each hand, with my arms fully extended to each side. She was really getting the message now. She understood that her reward was coming when she restrained herself! She was delighted with this knowledge. We began applying her impulse control skills to feeding time. She now watches her kennel mate, Gavin, receive his chow and begin eating. She sees this and doesn’t interfere! She waits until I ask her to sit near Gavin and wait. She watches me put her big chow dish down across the pen and stand up again. She sits and waits and looks longingly at her dish. Then she looks and me and is rewarded when I invite her to “Take it” in my most cheerful voice! She covers the ground in one big, joyful, rush forward to her chow.

Her excellent impulse control is now being applied to waiting at open doors, walking on a loose lead, holding her down or sit, and resisting pull on her harness. We will be asking her to resist all pressure applied to her harness tether. More than that , to apply that resistance automatically whenever she feels the pull. Simultaneously I am teaching her to follow cues she receives from the lead or those requested verbally. In this way her boy will be able to walk with her calmly and slowly, but will not be able to run away from her. Penny now also hops into the van on request and waits patiently before hopping out on request. As we polish her skills in environments with low to moderate levels of distraction we are creating a pattern of success that will later transfer to advanced work.

Penny is enjoying her work, loves people, loves going to town for errands and people watching. She’s so charming she’s disarming! Everyone who meets her falls in love with her instantly and can’t resist coming over to talk to her! I know Penny will continue to love her work and the people contact it brings her!

Warm regards to all of you and snuffles from Penny!
Leslie

Back to Penny’s Adventures