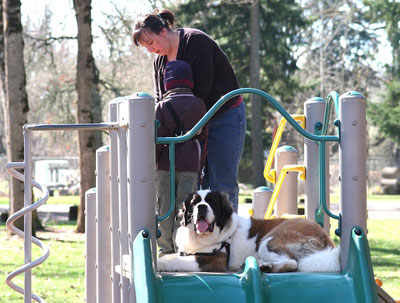 Penny is a delight. A big teddybear with a soft tongue and a huge heart! The other morning I let her in from her large pen and field where she spends the night with her collie friends. I wanted her to join me for breakfast. My procedure with the Service Dogs is teach them life skills, including appropriate table manners, by letting them share my life routines. I began the morning lesson, by teaching Penny to ‘leave it’. This is an important skill for any dog, but on this morning it turned out to be a critical skill for me.

Now I introduced this idea to Penny by tempting her with a handful of smelly, fresh baked, salmon treats. I put my closed hand up to her face and asked her to “leave it”. Her big nose happily snuffled my closed fist. She snuffled and snuffled, licked and pushed. Nothing worked. She looked away for just a moment, and I showered her with praise and said clearly in a cheerful voice “Penny, take it!” as I held a treat out to her with my other hand. Instantly she took the offered treat and looked up at me with her eyes sparkling. Again I tempted her with my closed hand full of the odiferous salmon morsels, and asked her to “leave it”. Again she snuffled, snuffled, looked up at me, and looked away. Instantly she was showered with praise and the tender morsel was again available in the open palm of my other hand! Penny seemed delighted. All she had to do to get the treat in this game – was not TAKE it, until it was offered! She could do this! The third and fourth time I held my closed fist toward her and asked her to “leave it” she turned her head away instantly and waited and watched for the treat to appear in my other hand. This was an easy game. One more time I held my hand out toward her and asked her to “leave it”. To her suprise, this time my hand was open and a pile of little morsels were exposed. Briefly Penny snuffled toward the pile. Like a venus fly trap, my fist was closed. Penny turned away. Instantly a treat was available in my other hand as I said “Penny, take it!” and praised her profusely. Appreciatively, she snuffled up the tiny morsel. One more time I held my open hand, full of the tempting treats, up to Penny’s nose. With a bright expression, her eyes met mine, she glanced at my open hand, and quickly looked away! I showered her with praise and offered her a little pile of treats in the open palm of my other hand and said cheerfully “Penny, take it!” “You’re such a good girl”.

As my soft boiled eggs bubbled invitingly in the pot and the keurig coffee machine finished preparing my first cup of morning coffee, I pondered just how I was going to get these goodies all the way across the room with Penny by my side. She was watching me inquisitively. We looked at each other. I wasn’t sure just how established a skill the “down” was. I knew she had held her down at CURVES and during my office appointment…but there weren’t eggs and toast at nose level then. I took a deep breath. I had a plan. I grabbed the brown paper bag full of assorted training treats from Animal Crackers pet supply. I had gotten an extra big bag in expectation of Penny’s arrival. Confidently, I started off across the room to my chair by the couch. I placed the bag of treats on the couch behind the bolster. Now I know there’s no way of hiding treats from Penny’s keen nose, but I didn’t want her to see them as a free offering either!

She followed me enthusiastically, confident that I was doing something far more fun than watching a pot boil. I cupped my hand over a little pile of yummy treats and Penny plopped down instantly. She certainly remembered her lesson in “down” from the previous session! As soon as I saw her elbows touch the ground I rushed back to the kitchen to grab my plate of eggs and toast and my cup of hot coffee. I got back to my seat at the same moment Penny snuffled up the last of her little pile. Quickly, I put the plate and coffee cup down on the arm of the couch – right in front of Penny’s nose! In a clear, friendly and unfaltering tone I said “Penny, leave it!” As she pulled her face away from my plate, I grabbed a handful of treats from the bag on the couch, held them to her nose and quickly lowered my hand to the floor in the familiar cupped presentation. I fervently hoped that Penny would believe my cupped hand covered treasures much better than my eggs and toast! Instantly, Penny was back in her spot on the floor at my feet! I was so proud of her! She already understood the concept of “leave it” and she was responding to the pattern she was learning about “down”. My eggs and toast were safe. The rest of breakfast was slightly rushed, but uneventful. I spoke to Penny in soothing and cheerful tones puncuated by the appearance yummy treats on the floor between her massive paws. She was learning that she could control the flow of goodies by volunteering desired behaviors. An important lesson for such a big girl.

Penny’s also been learning to “hop up” and “hop off’”. This will be very helpful in loading riding and exiting vehicles. So far Penny excells in these skills in one location and only for her meals. But in short order she’ll be generalizing this skill and the inherent potential for rewards associated with her efforts!

More soon 🙂
Hugs,
Leslie, and snuffles from Penny too!

Back to Penny’s Adventures