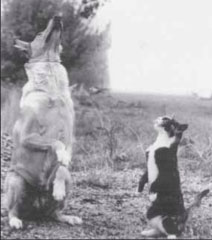 I delved into the all-consuming topic of Animal Behavior, both at UCLA and at the nursery of the Los Angeles Zoo. We bred a couple of litters for Guide Dogs for the Blind, Inc., and I spent a week at San Rafael researching and photographing for my book, Banner, Forward! The Pictorial Biography of a Guide Dog (1969 E.P. Dutton & Co. New York).

And then we drove north and fell in love with Oregon. At the foot of its Coast Range mountains, we stumbled into a little paradise named Kings Valley.

Our life really only assumed the character of “lifestyle” in 1970, when we settled on the farm – a 160-acre fairyland of timber and pastures at the end of a dirt road, out of earshot of the nearest neighbor. In a truck named The Ark to Kings Valley, we brought with us from the big city three dogs, two cats, two otters, two chinchillas, two rabbits, two ducks, two doves, two toucans, one raven, and two goats, but missing from this diverse collection of animals were sheep. What’s a farm without sheep? We promptly acquired some fine purebred sheep to breed for wool.

But hey, what’s a sheep farm without Collies? But Collies among burdock and cockleburs? Well, we’ll just shave them. But… no, that would make a Collie smooth! OK, let’s just invent a new breed! What? The breed already exists? Then we’ll just have to find us one!

Our perfectionist, ambitious, presumptuous spec sheet for a foundation bitch rattled several of the breeders we had approached. But Sandy Tuttle liked it. Ch. Kasan’s Katydid, a daughter of Ch. Black Hawk of Kasan, ROM, had been bred to her Ch. The Blue Baron of Arrowhill, and Sandy steered us to a special litter – to that perfect blue bitch puppy – that was Hallelujah!

When Halle had earned her CD and become a breed champion, she was twice bred to grandpa Hawk. These two breedings gave us two great winners: Ch. Kings Valley Hosannah, who finished with a Best of Breed win at the Collie Club of Oklahoma, and Ch. The Pied Piper of Kings Valley, who in three specialty shows, at the age of 6 months, finished his title at the Texas 1977 CCA and went Best Smooth Puppy.

Hosannah had only one litter, sired by the great representative of the Parader family, Ch. Antrum All-Try Of Northshield, UDT. In her only litter, Ho-Ho produced five champions, including Ch. Kings Valley The Blue Enchanter, CD, who in turn sired 19 and 7/8th champions, all of whom held several working titles.

When most of the treacherous weeds had been pulled, sprayed, mowed, and otherwise decimated, a great event happened courtesy of Sandy Tuttle. She was Arrowhill Kings Valley Event, a lovely tricolor Rough. Most significantly, her breeding to Ch. Kings Valley The Blue Enchanter, CD gave us a great line of Smooths through her daughter, Ch. Kings Valley Tri’d N’Tru, ROM. Chummy herself and every one of her kids earned numerous working titles. Ultimately our passion for breeding brought us five Breeder of the Year awards for Smooth Collies from the Collie Club of America.

Our hope and our aim was and will always be to have our dogs feel as engaged and energized as if they were family companions. Our dogs’ lives are enriched by social, visual, olfactory, auditory, and tactile stimuli that sharpen their senses and tweak their intelligence. Then they can become good learners, able to make good decisions. The setting, activity level, and close contact with people help them to be comfortable, happy, civilized, and multifaceted dogs. 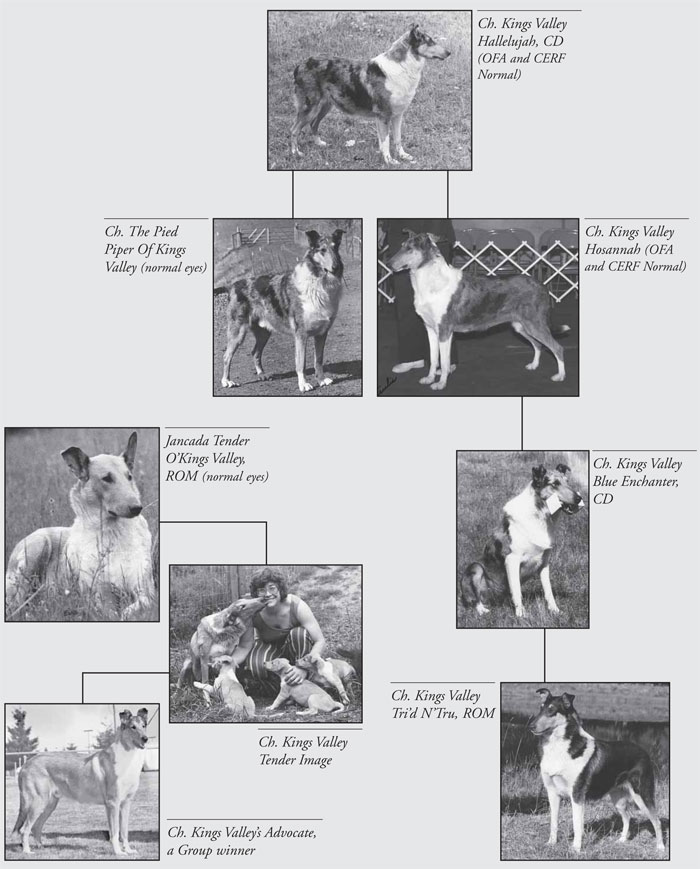