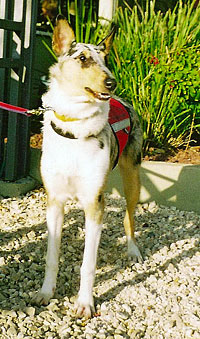 Sky is an epilepsy alert dog. She has been working with her partner Osnat Hamo for over three years.

Osnat suffers from a serious form of epilepsy. Although on medication, she was prone to suffer from frequent grand mal attacks, which would occur without prior warning and leave her helpless. Osnat felt unable to leave home without a companion, from the fear of having an attack in a public place. She was ashamed and embarrassed and felt that people were disgusted with her. There was also a good deal of physical danger, as during an attack she has no consciousness or control over her body and can easily injure herself. As she was not able to provide herself with a companion at all times, she felt it necessary to remain at home more and more. Even in the environment of her home, an attack catching her unaware could easily result in physical injury.

Osnat received Sky at the age of two months and her training was immediately begun. Sky was taught to respond to the behavior accompanying an epileptic attack, both by simulating attacks and by working with her at the time of actual attacks. From the age of three months, Sky began alerting in advance of the actual attacks, and with time, the warning period before the attack could be from a minute or so up to an hour or more.

This warning gave Osnat the possibility of preparing herself, sitting down or putting herself in a safe place or position to prevent injury, of calling for assistance if necessary, and thus being able to cope safely with the attacks.

Osnat developed a great deal of confidence in Sky, as she proved herself to be highly reliable in warning in advance of an episode, and felt more and more confident in leaving home with her dog to accompany her and live a normal life in the workplace and the community.

Over the three years that Osnat and Sky have been together, the frequency of attacks has decreased to the point where for the last months, Osnat has had no attacks at all. One of the factors that her doctor feels is contributing to this change in the patient’s condition is her total confidence in Sky, which enables her to be more relaxed and without stress, ameliorating greatly her condition.

Sky has changed Osnat’s life, and made it possible for her to live normally.

Sky was trained by Yariv Ben Yosef of the Israel Center for Service and Therapy Dogs.

Back to Kings Valley Collies Around the World